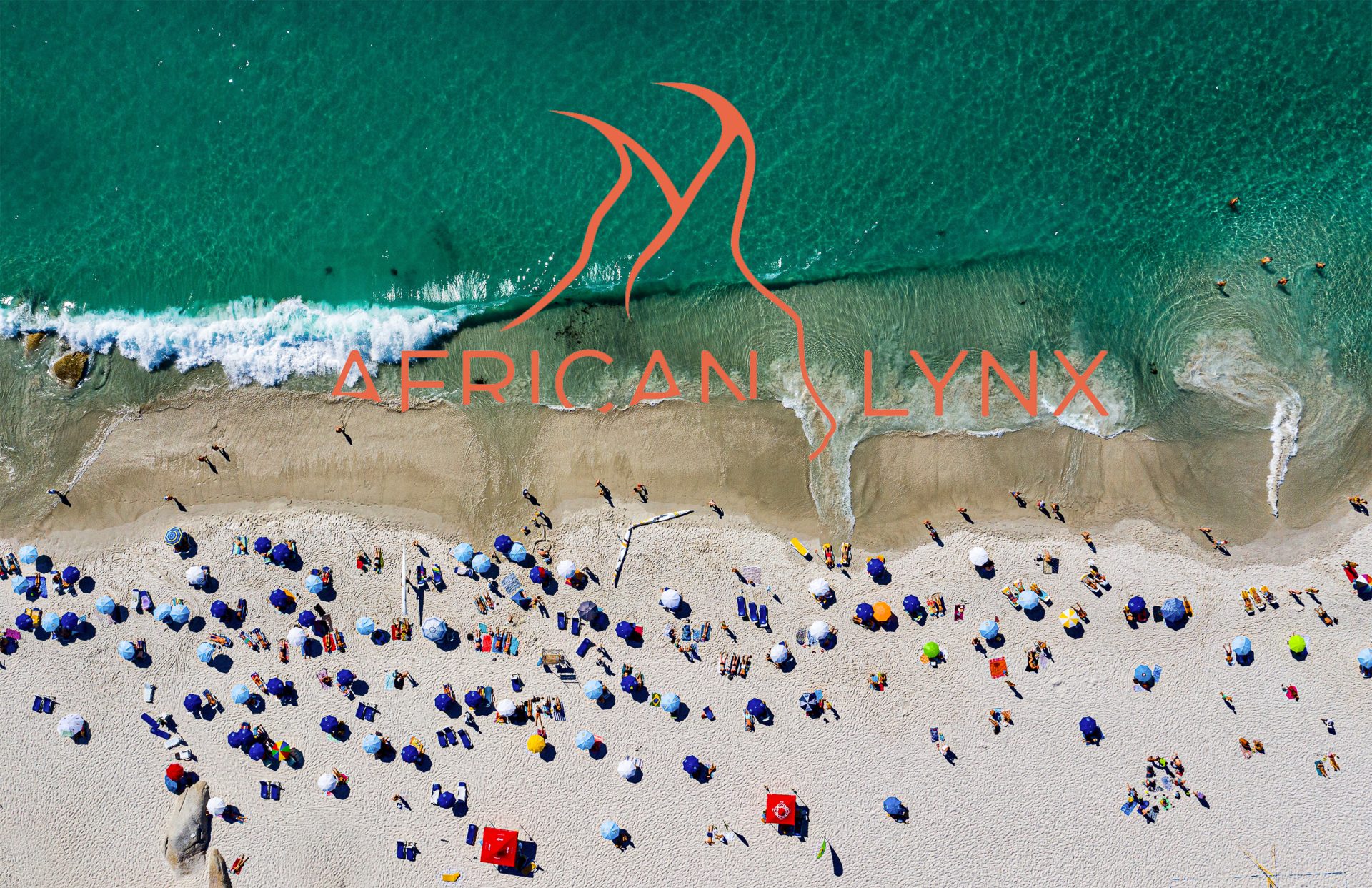 A note from the director’s kitchen table:

We have certainly been humbled by the severity of the impact the pandemic is having on tourism across the globe. The expected recovery time of long-haul travel from our source markets is, unashamedly, scary. However, we know that travel to Africa will recover. And as a low-density destination, it’s recovery possibly quicker than the rest of the world.

Our strategy is to be there for you when it does. To ride this storm and survive. Being a small, resilient and dynamic business we most certainly will survive…but not without already having made some hard decisions.

In the meantime, African Lynx is further setting its foundations in our Private Guided Travel Services. Investing in product development, guide training and the exposure of our magnificent corner of Africa to you in order to inspire future travel to the Cape. [Watch this space when lockdown ends!]

So on that note, we are releasing our latest video to you today. A short film, narrated by the African Lynx team, which provides insight into our vision and how we have created the highest quality, Private Guided Travel Service. We hope you enjoy it. Click on the link below to watch!

And last but not least, please enjoy the second instalment of our past summer experiences with our guests…from the guide’s perspective. 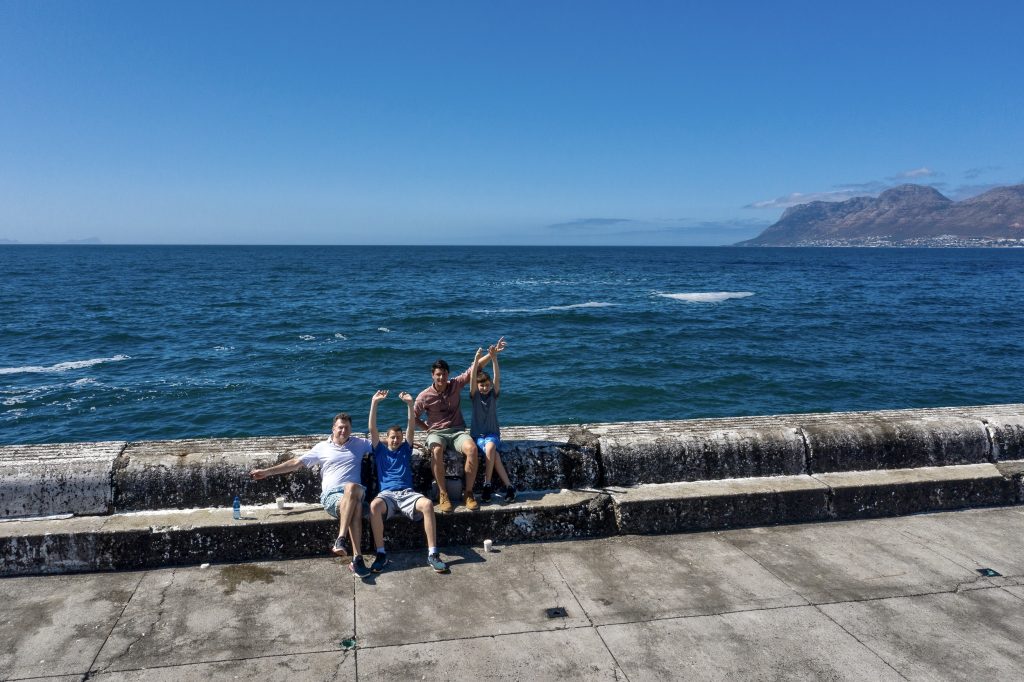 “We had a WONDERFUL time in Cape Town with Simon. I have always heard about what a beautiful city Cape Town is, yet I was still surprised by its beauty and the significance of Table Mountain. It truly is a breathtaking city with tons to offer. Our days with Simon were full-on and action-packed and we loved experiencing Cape Town through his eyes. Simon’s ability to connect with my sons was so natural and my boys absolutely loved Simon, and of course, we did too.  Zachary truly misses him. African Lynx is a fabulous and special service. Thank you again for a beautiful and special experience.”
– Jill, USA. Feb 2020 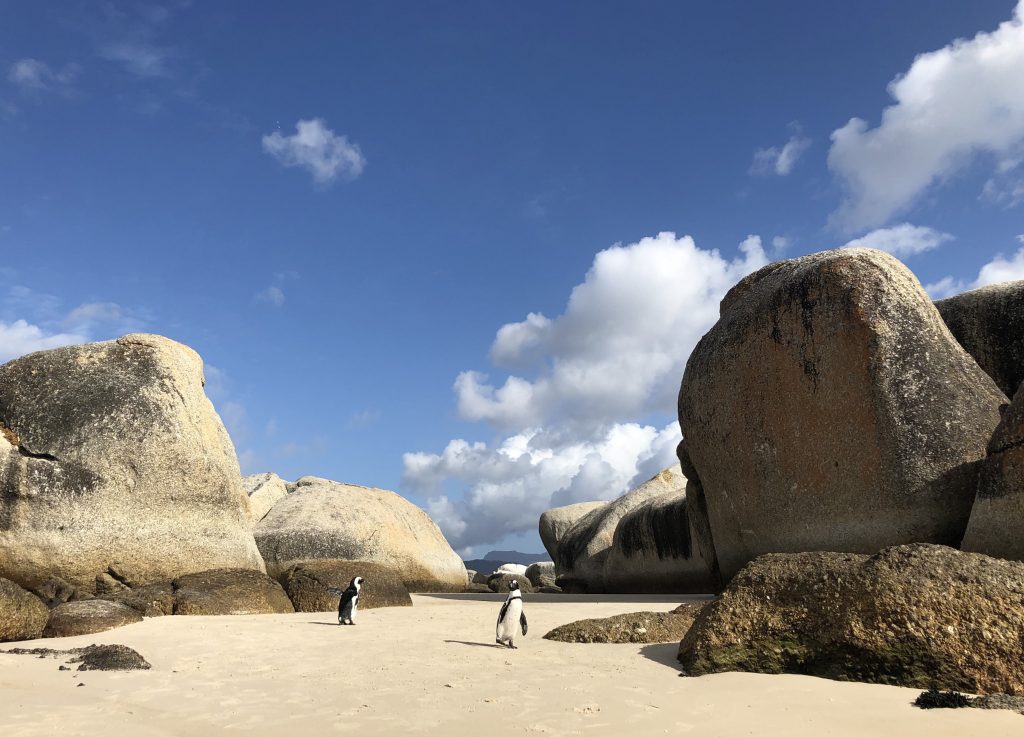 Just you and the penguins. Thanks to some local knowledge, a rock scramble and timing the tides to perfection. 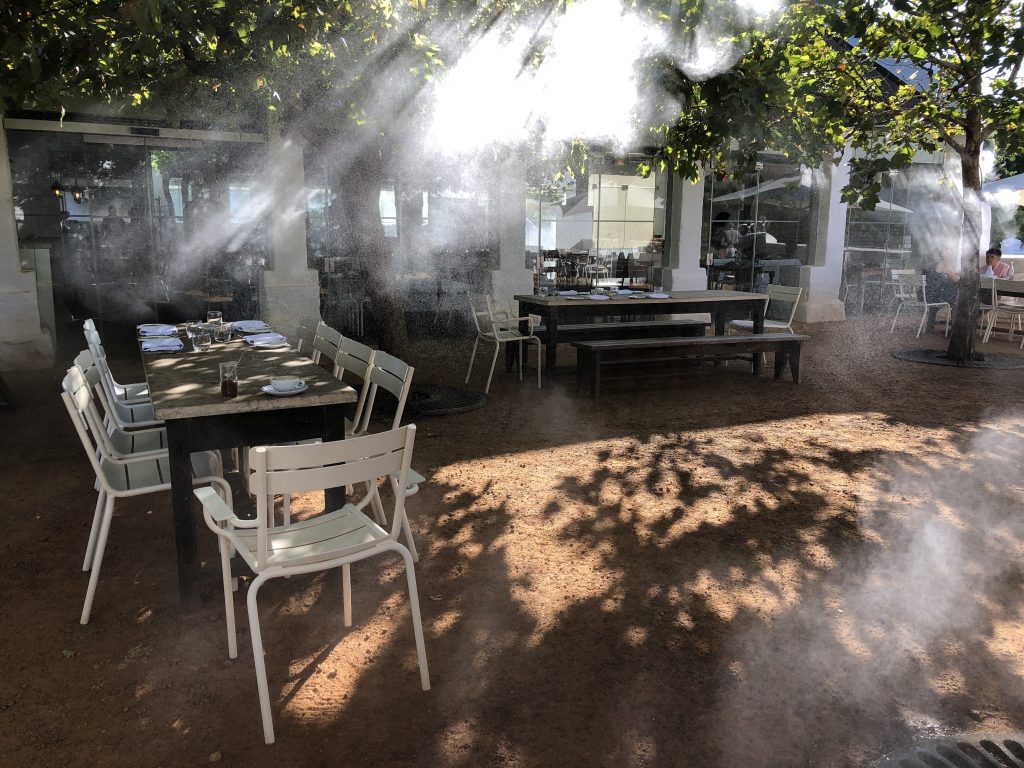 The heat during summer in the Cape countryside can get rather extreme. On some days as hot as 40’C and above. Thankfully, mitigating factors have been introduced such as the fine mist sprayers found at Babel Restaurant, Babylonstoren. The beach is certainly not the first place that comes to mind when picturing an ostrich’s habitat. However, the sanctuary that is Cape Point, within Table Mountain National Park, is a stronghold for these quirky members of the avian world who spend rather a lot of time wandering the park’s desolate beaches. 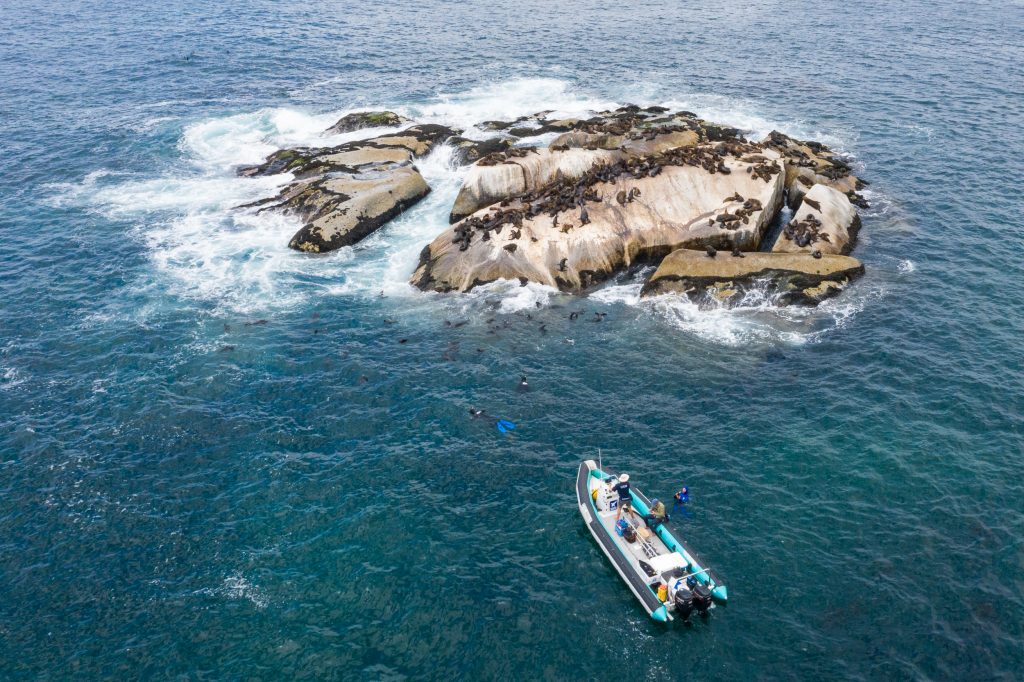 A summer excursion for the adventurous. The exclusive to African Lynx Ocean Safari, in partnership with Animal Ocean. Skippered by our good friend and marine biologist, Steve Benjamin. His unrivalled enthusiasm and knowledge create the most interactive, interesting and memorable day on the water possible. In this image, guests are seen snorkelling with one of the seal colonies off Cape Point. 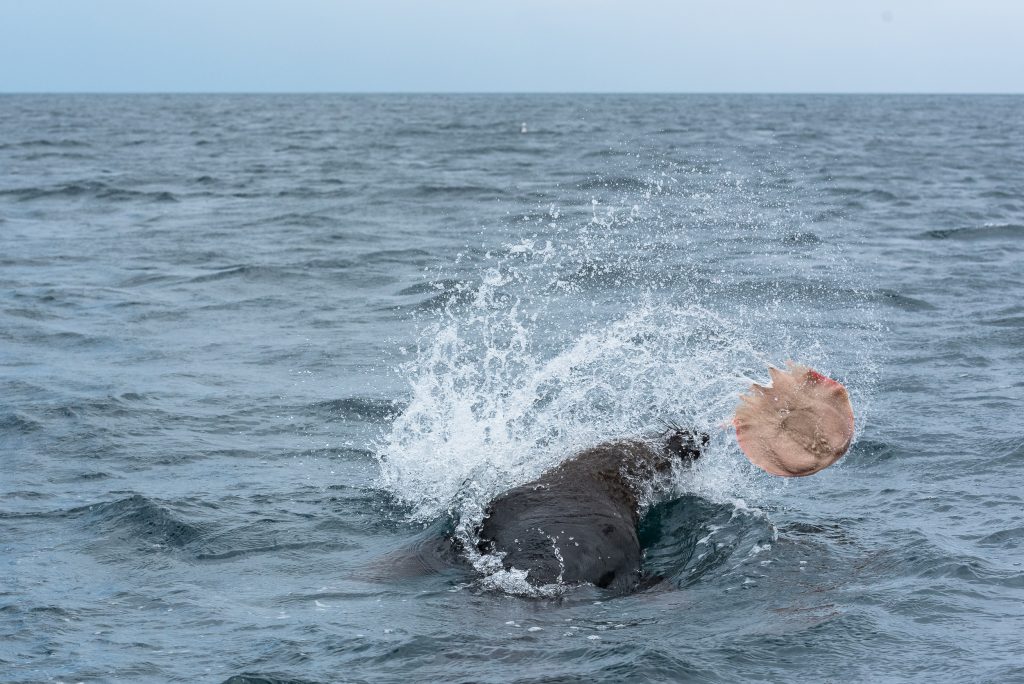 The Cape Fur seal is an animal you will see in abundance on the Ocean Safari. Both above and below the water. The latter only if you are adventurous enough to snorkel with them. This was the first time our specialist guide, Steve, had ever seen a seal eating an electric ray. FYI, an electric ray is capable of producing an electric discharge, ranging from 8 to 220 volts, in defence or to stun prey. 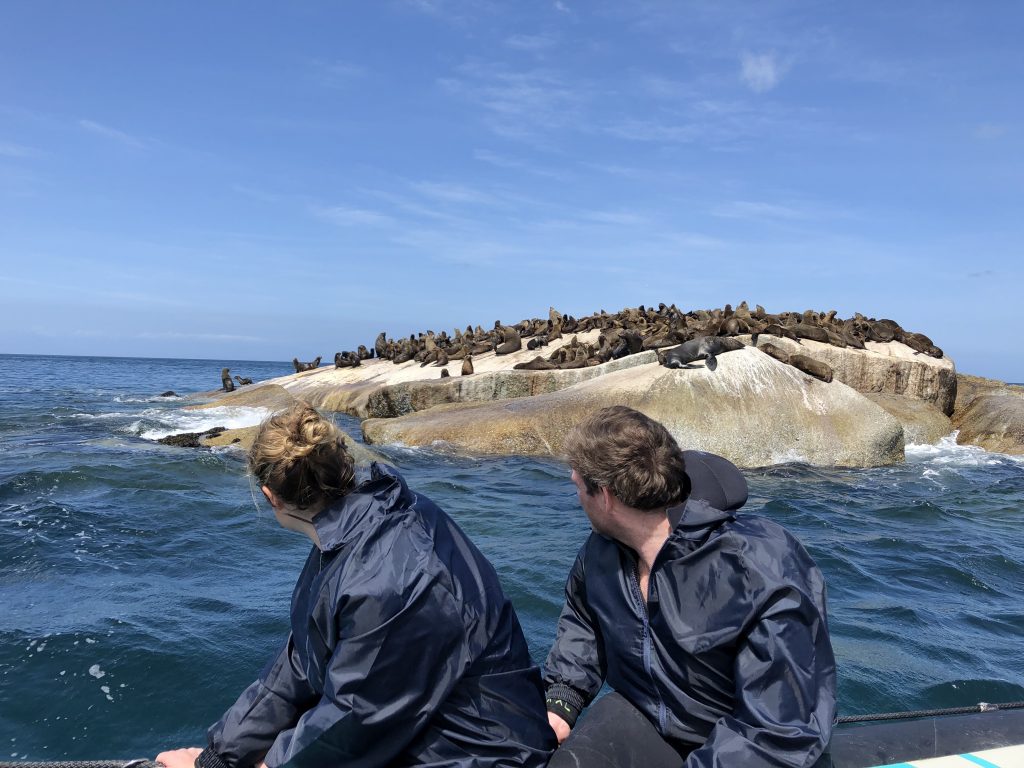 Yet another perspective from the Ocean Safari. Guests getting a close-up view of hundreds of seals having escaped the frigid waters of the Atlantic for some much needed African sun.

A speedy game of chess in the Company’s Garden. A historic garden where the Dutch originally grew fresh veg to supply passing ships on the spice route. A rather fun break taken during a morning walk through the charismatic heart of Cape Town’s centre. 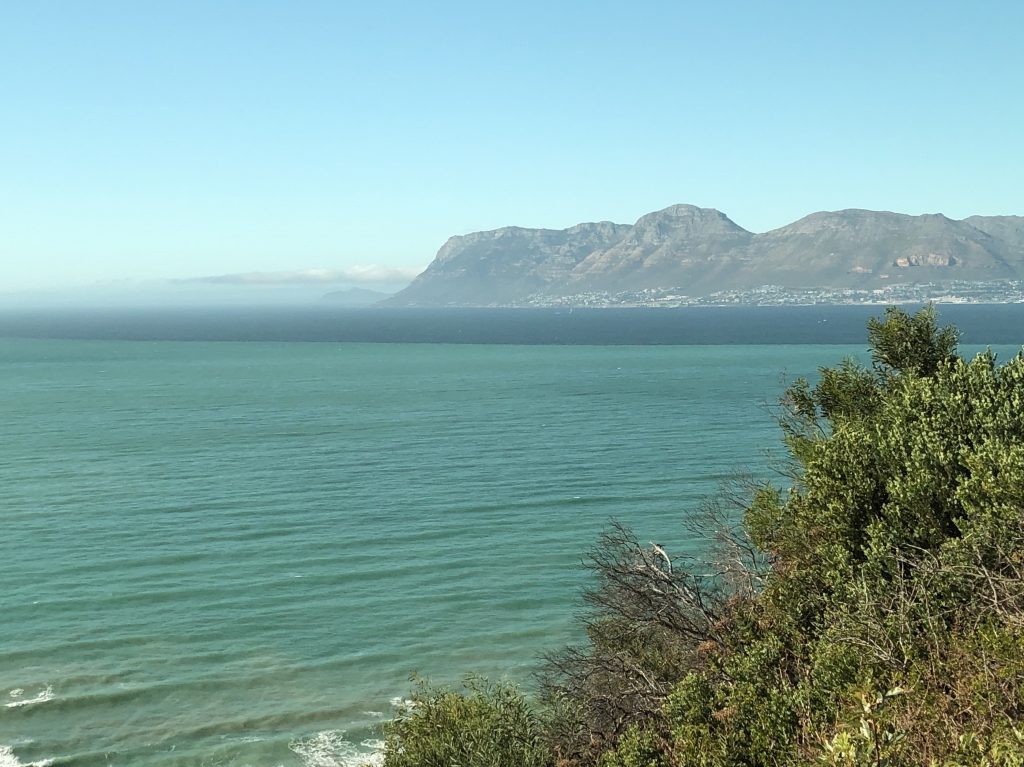 “The Two Oceans”. The Cape Peninsula is often incorrectly referred to as the meeting point of the cold Atlantic and the warm Indian ocean currents. The meeting point is, in fact, a little closer to the southern tip of Africa at Cape Agulhas. This photo very clearly shows where the misconception would have come from. This is the clearest division our guides have ever witnessed of two different currents colliding with each other within False Bay. The town of Stellenbosch was our playground for the day. This beautifully historic village is a student town at heart thanks to the famous university and the youthful energy is tangible. Ebikes, ice cream and wine tasting was the call of the morning. This wine farm in the Jonkershoek valley was our final stop on a sweltering ebike tour. The steep and dramatic mountains containing a lush sliver of wine farms, stables and nature reserve. The Hemel & Aarde Valley (Heaven and Earth). A stone’s throw from the coastal town of Hermanus which is famous for its whale watching. We opted for a gentle meander on horseback through the fynbos and orchards on this crisp summers morning. 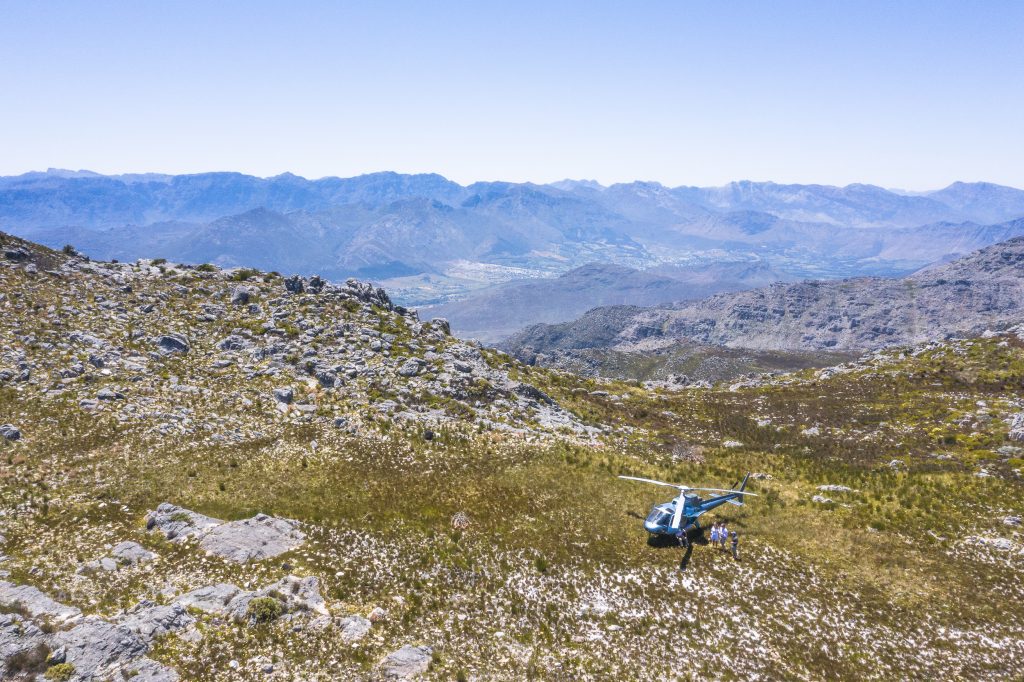 The most remote drinks stop we offer. Midway through one of our chartered flights between Cape Town and the Cape countryside we took a short break at altitude. A chance to stretch the legs and open the heli-bar. A place where the silence is deafening. 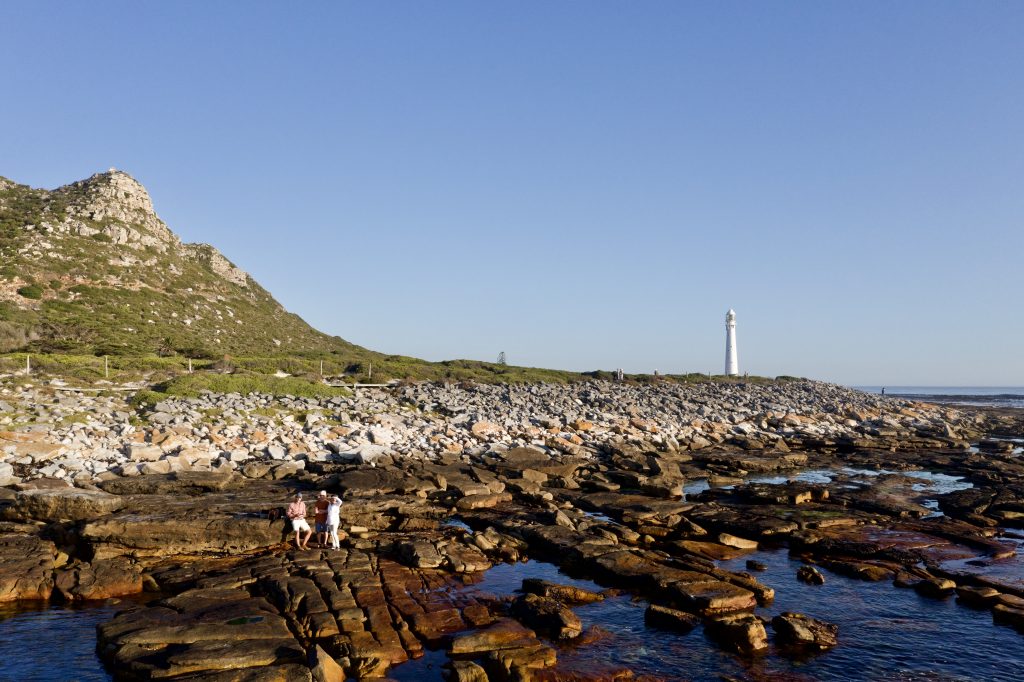 Going where only the locals go thanks to one of our team members who grew up in the sleepy, surfing village of Kommetjie. Sundowner drinks on the rocks watching the surfers and flanked by the continent’s tallest lighthouse. The guest’s slightly different accommodation choice allowed for a little more in-depth exploration of the southern reaches of the African continent. A treasure trove of hidden gems. 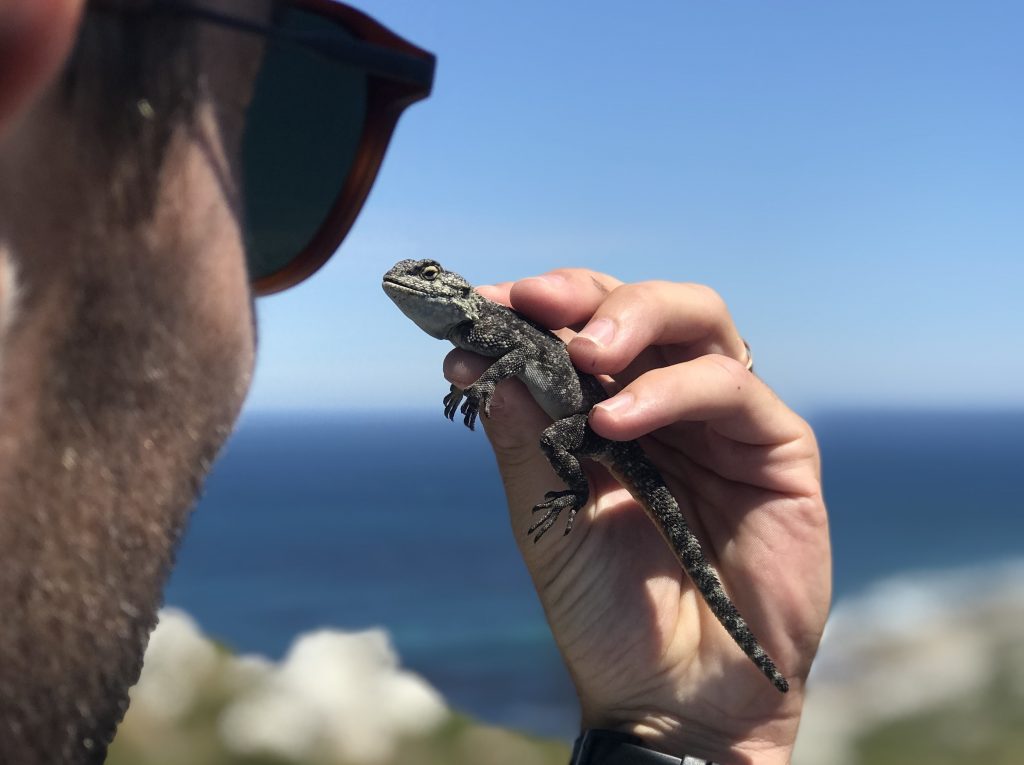 Head guide Rodger Bowren and his lightening-fast hands. His fascination with the natural world and years of playing and working outdoors has led to his elite-level lizard catching skills. A chapel purpose-built for one reason only. Wine Tasting. At Ataraxia Farm in the Hemel en Aarde valley, weddings are constantly turned away as this stunning building is for wine business only. The cool climate lends itself to some of the country’s finest Pinot Noir. The medieval castle-like structure of the tip of Cape Point, otherwise known as the Cape of Storms. A passage of water feared by seafarers the world over in the early days of the spice trade. The ferocious winds and gigantic seas have dotted this coastline with shipwrecks. On a spectacularly calm day, we, however, could appreciate getting this close and living to tell the tale. 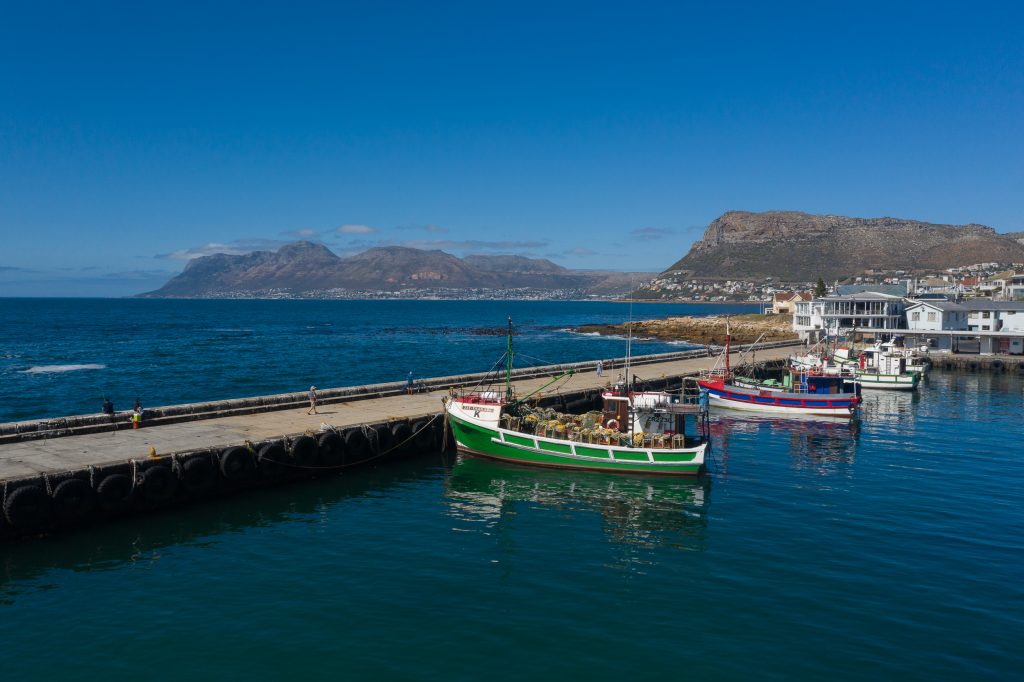 The colourful fleet of fishing boats in the Kalk Bay harbour. Looking off into the distance is Simon’s Town, known for the famous penguin colony at Boulders. Beyond that, to the far left, is the start of Cape Point.

Read more articles from our journal

A note from the director’s kitchen table: We have certainly been humbled by the severity of the impact the pandemic is having on tourism across the globe. The expected recovery time of long-haul travel from our source markets is, unashamedly, scary. However, we know that travel to Africa will recover. And as a low-density destination, it’s recovery…

A note from the director’s kitchen table: We have certainly been humbled by the severity of the impact the pandemic is having on tourism across the globe. The expected recovery time of long-haul travel from our source markets is, unashamedly, scary. However, we know that travel to Africa will recover. And as a low-density destination, it’s recovery…